Investors often ask me why I focus so much on bitcoin instead of altcoins.

I get why people ask this question. Bitcoin is already huge. And many investors assume they’ve already missed the boat, so they want to find the next bitcoin.

Here’s the thing. Most people still don’t realize just how far ahead bitcoin is in this race. Bitcoin was built to serve as an alternative financial system. It is already fulfilling this purpose.

Get Early Investing into your inbox
Become a smarter investor in startups, crypto and cannabis by subscribing to our FREE newsletter filled with market research, trends and expert analysis.

People around the world buy bitcoin as a hedge against inflation and reckless monetary policy. In Venezuela, where hyperinflation runs rampant, bitcoin has become a major part of the economy. Many citizens choose to store their savings in bitcoin rather than the bolivar. And they only convert bitcoin to bolivars when they need to buy something.

The map below, which is part of an excellent piece of research by Coindesk, shows volume on peer-to-peer bitcoin trading platform LocalBitcoins compared to GDP (the larger the bubble, the more peer-to-peer trading volume, adjusted for size of the overall economy). 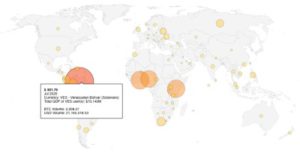 As you can see, Venezuela leads the world in peer-to-peer bitcoin trading volume (adjusted for GDP). It’s no coincidence that the country also has the highest inflation rate.

And if you haven’t read the 2019 New York Times article “Bitcoin Has Saved My Family” yet, I recommend it. Here’s an excerpt:

I keep all of my money in Bitcoin. Keeping it in bolívars would be financial suicide: The last time I checked, the rate of daily inflation was around 3.5 percent.

So bitcoin’s usefulness is not hypothetical. It’s very real.

Now let’s briefly talk about liquidity. Bitcoin is by far the most liquid cryptocurrency around the world. In almost every country, you can convert bitcoin into local currency through either official exchanges or peer-to-peer platforms. Its impressive trading volume is what makes institutional buying possible (more on that here).

And when it comes to security, the bitcoin network also stands apart. No other coin has nearly as much computing power securing it. Some estimate that the Bitcoin network currently uses around .21% of the world’s electricity. Yes, that’s a lot. But securing a decentralized financial system is no small task.

Bitcoin is also far more decentralized than 99% of altcoin projects. There are hundreds of thousands of mining machines and nodes operating around the world. There’s no central authority controlling the supply. I believe this will become increasingly important as the market digests the SEC’s recent actions against Ripple (XRP).

Altcoins, meanwhile, are still speculative investments without much real world utility. There’s nothing wrong with that — but we should recognize it. None comes close to bitcoin in terms of fulfilling their stated purpose.

Ethereum — the second largest crypto — does have a fair amount of real world utility. The Ethereum network has serious potential to provide decentralized finance (DeFi) applications in the future. But today, it’s still mostly used to facilitate the creation of and investment in other coins/tokens.

Eventually, whether it’s in five years or 30, it’s likely that some new coin will come and give bitcoin a real run for its money. But I don’t expect it to happen any time soon. I see bitcoin continuing to build on its lead in liquidity, utility, security and infrastructure for years to come.

To be clear, I’m not saying altcoins aren’t worth researching and investing in. There’s certainly money to be made in altcoins in this environment. And some altcoins will inevitably outperform BTC for periods. But there’s a heck of a lot more risk with alts. When bitcoin “crashes,” altcoins often go down 2x as much, or more.

Bitcoin should form the core of any crypto portfolio. It’s the most likely, by far, to see continued upward momentum. It’s the only crypto I see as a true inflation hedge. If you want to add in some high quality altcoins, great. Just be careful, do your research and limit your position sizing.

Regulators Try to Tighten Their Grip on Crypto

It’s a tale as old as time. A startup creates a great product, generating lots of sales and happy customers. A corporate behemoth tries to compete with the…

Why You Need a Metaverse Startup in Your Portfolio

I recently recommended a metaverse play to our Crypto Asset Strategies members. I’m not sold on the metaverse. But I still believe gaining exposure…

Humans have long been fascinated by the concept of artificial intelligence (AI). It’s been the subject of many stories and works of art throughout history — far before…